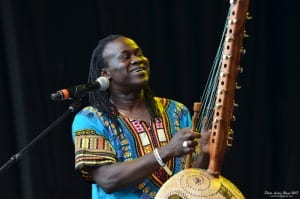 Not every African musician is a griot. These bearers of oral tradition are members of the Kouyaté, Diabaté and Sissokho castes; the only families who diffuse the memory of the Mandinka people. Not only does Zal Idrissa Sissokho bears the name, but he also has the cultural background and incredible improvisation skills. Zal plays kora and sings melodies inspired by or borrowed from West African tradition in Malinke and Wolof. After moving to Montreal in 1999, Zal Idrissa Sissokho quickly established himself in the Montreal soundscape and received grants from the Canada Council for the Arts on several occasions since 2001. While being a solo performer, he also collaborates with numerous arstists and bands such as Les frères Diouf, Celso Machado, Constantinople, Fakhass Sico, Lilison di Kinara, Richard Séguin, Takadja, and Muna Mingole. He contributed to the albums of Corneille, IKS, Hart Rouge, Monica Freire, Lousnak, Sara Rénélik, Les frères Diouf, and Musa Dieng Kala. Zal Idrissa Sissokho also took part to Cirque du soleil’s Ô show, in Las Vegas, and to the movie score of Robert Favreau’s A Sunday in Kigali. In addition, Zal was chosen along with 12 other musicians for Luc Boivin’s documentary La symphonie du nouveau monde which was broadcasted on ARTV and CBC. Zal was also a guest of the Belle et Bum show in 2009 and 2011. In 2013, Zal participated in the shooting and the soundtrack of L’autre Maison (Max Film) from Mathieu Roy, a movie which made the official opening of the Festival des Films du Monde de Montréal.

In 2004, Zal founded the Afro-Mandinka band Buntalo, a name that refers to the kora which crystal sound seduces the listener as soon as the first note resonates. Indeed, the African 21-string harp combines wonderfully with contemporary western music. For these reasons, Buntalo’s repertoire includes original compositions and Mandinka classics, while modernizing sounds and preserving  the identity of multi-centenary compositions all-along. The third album of Zal and his band Buntalo was released on March 24, 2017, and named La Palabre, which means the junction of speech and action: to say what one does and to do what one says. While raising contemporary and essential society issues, Zal Sissokho puts forward the Kora’s unique sound for a discovery and travel invitation. His Afro-Mandingo-influenced music, mixed compositions and committed words are once again highlighted in an album bearer of hope and enriched by the multiple collaborations behind its creation.

Amongst other distinctions and honors, Zal was awarded with the OQAJ-Rideau prize during the official February 2008 Bourse Rideau showcase in Quebec City. Thanks to this award bestowed by the Office Québec-Amériques pour la Jeunesse et Rideau, Zal was able to visit Mexico in October 2008.