Each year, the Centre des musiciens supports residency projects to aid professional artists in their artistic and acoustic explorations. This support includes remuneration for compositions, a significant number of rehearsal hours, access to the premises of the Centre, public dissemination of the works as well as support for provincial, federal and international outreach. 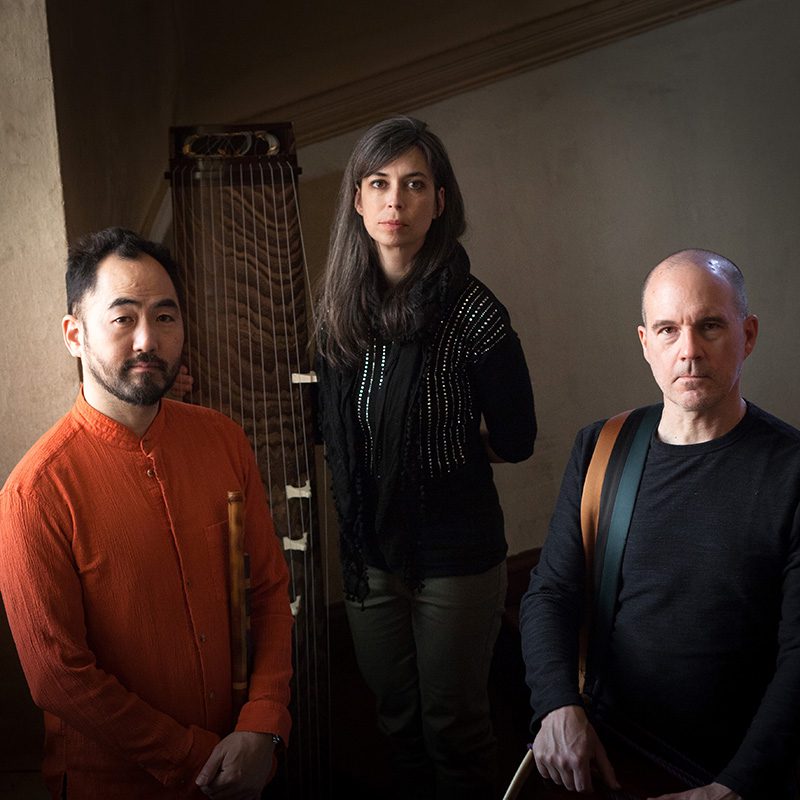 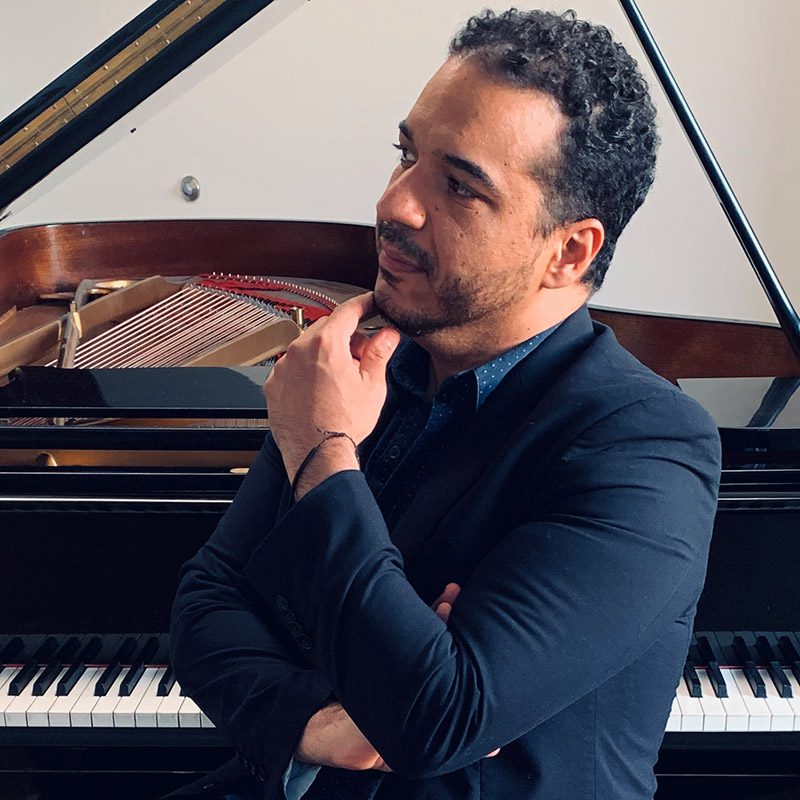 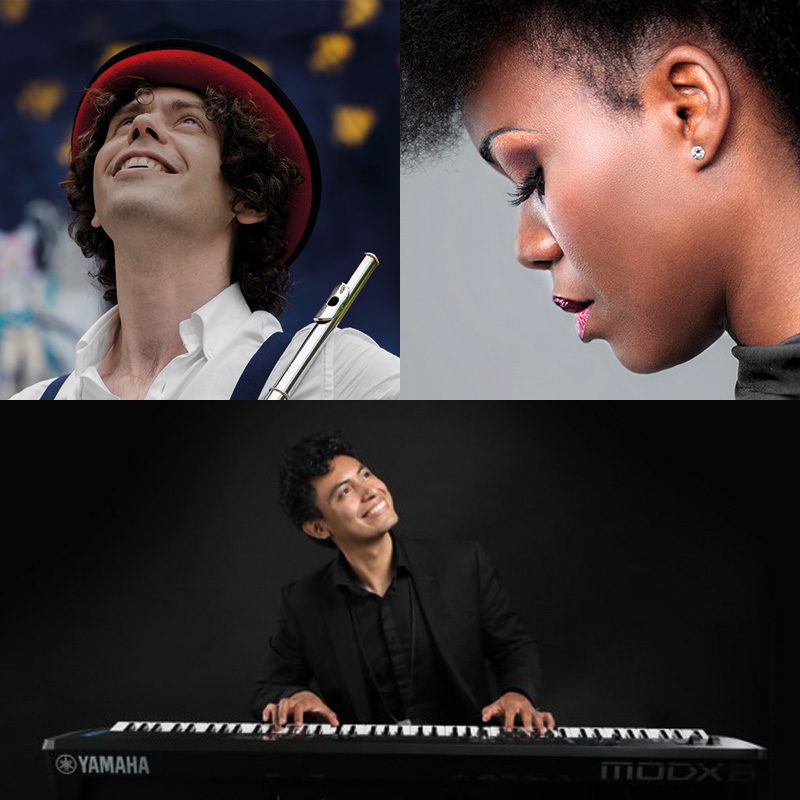 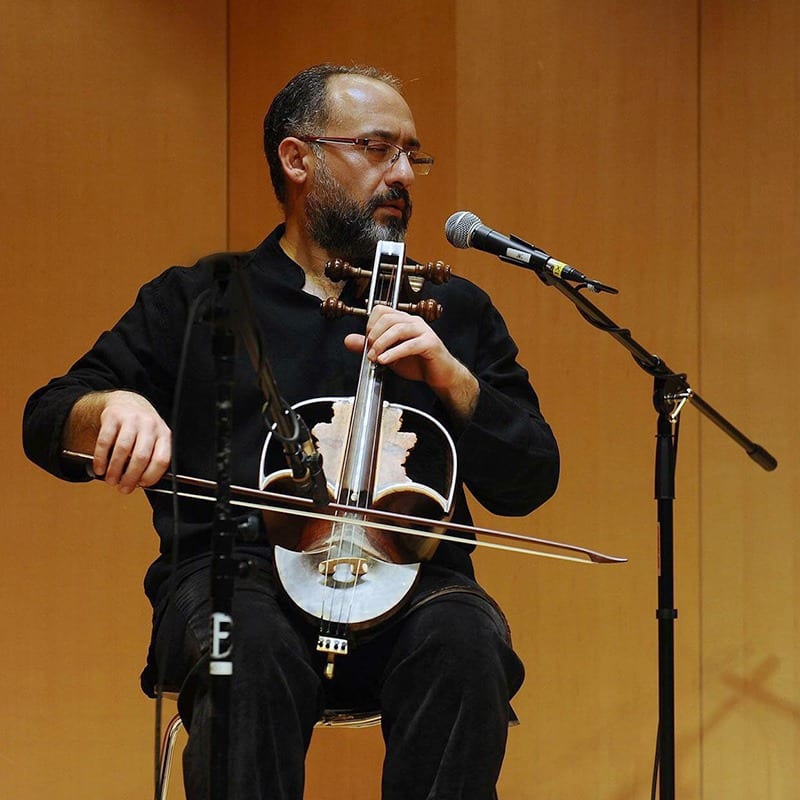 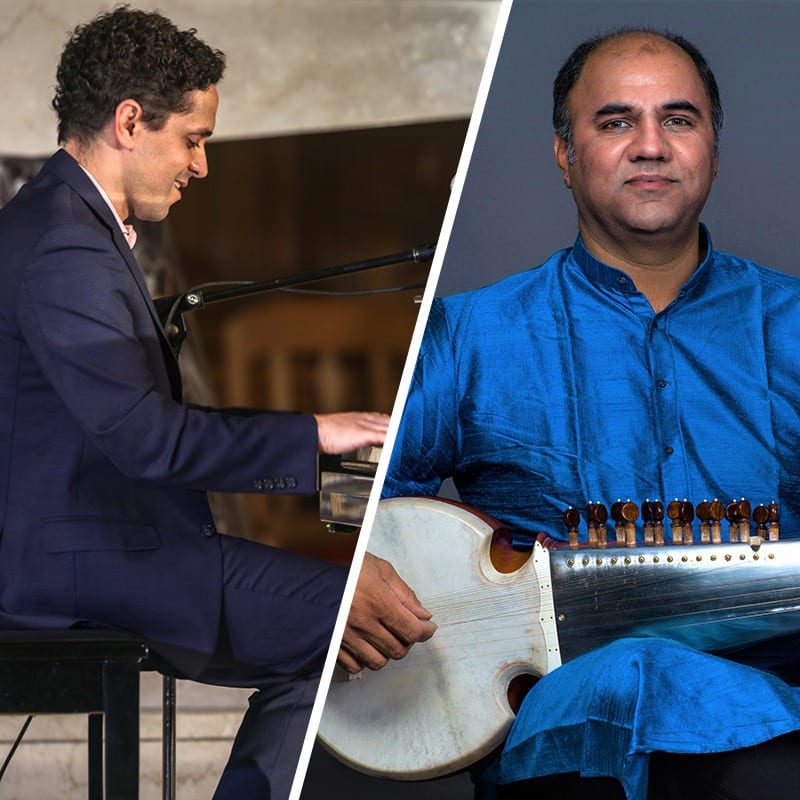 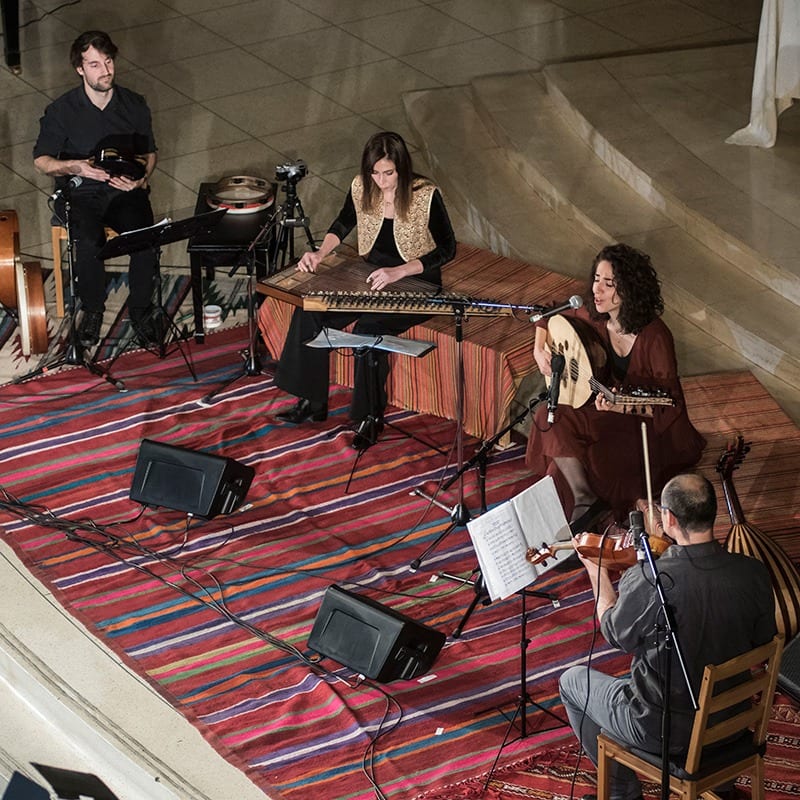 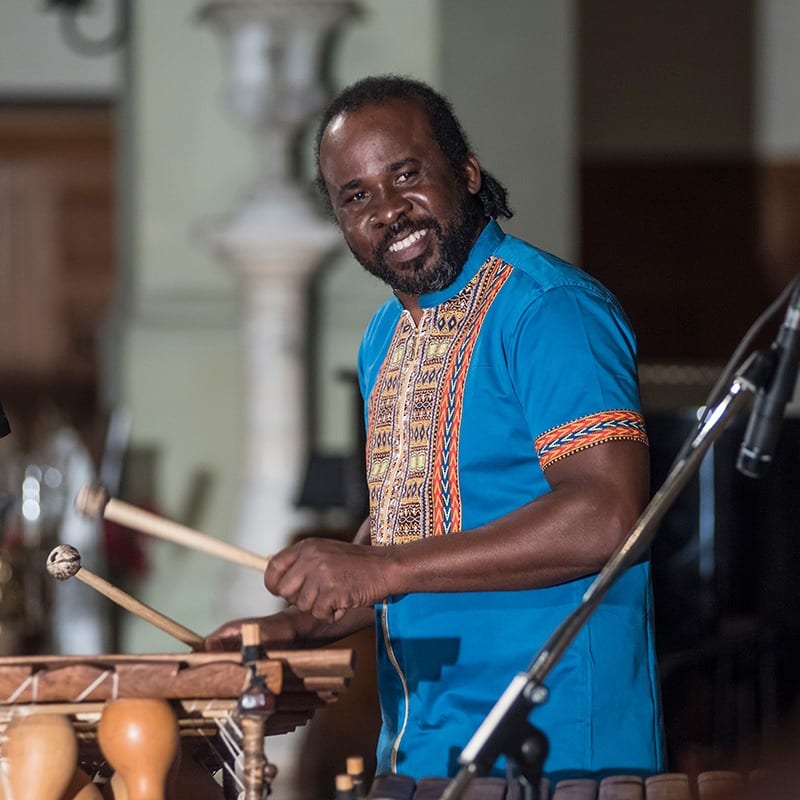 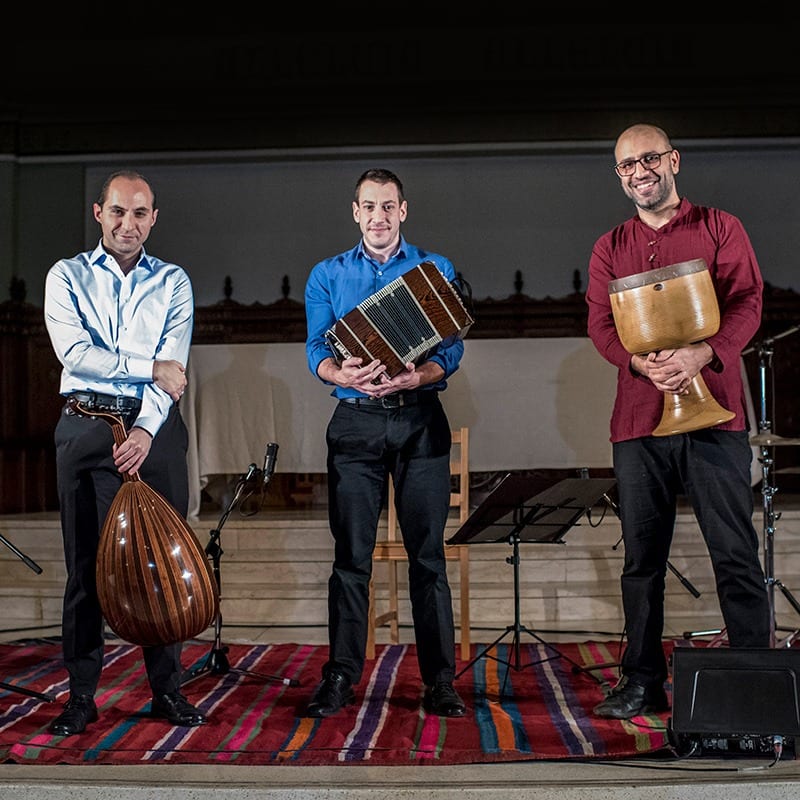 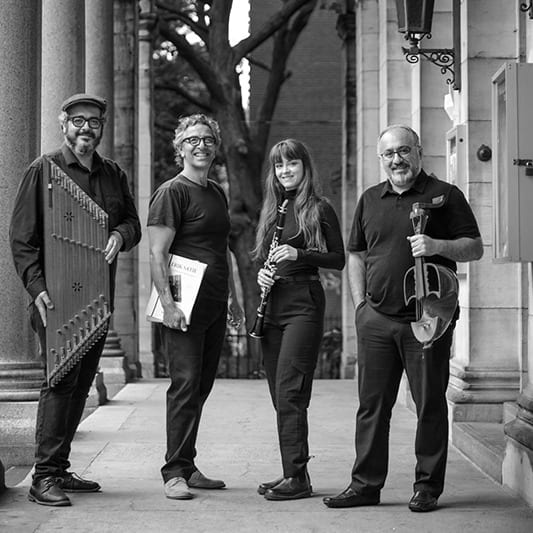 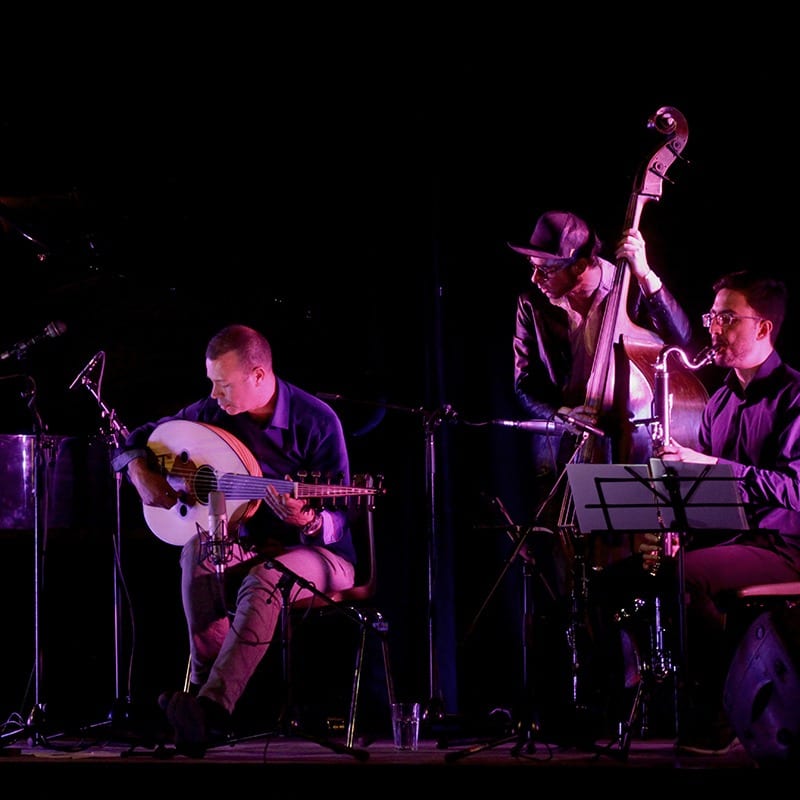 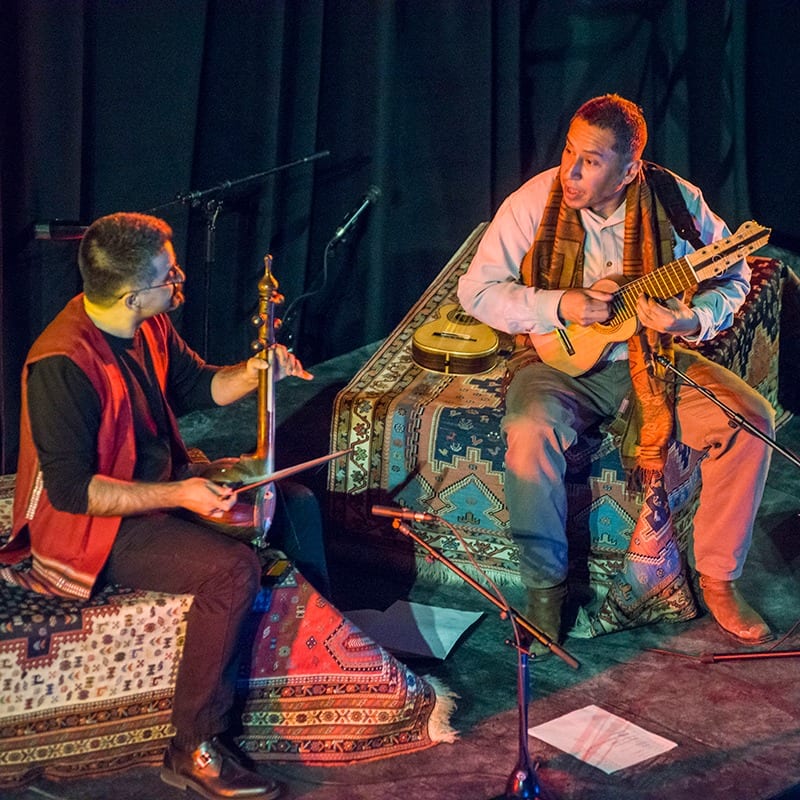 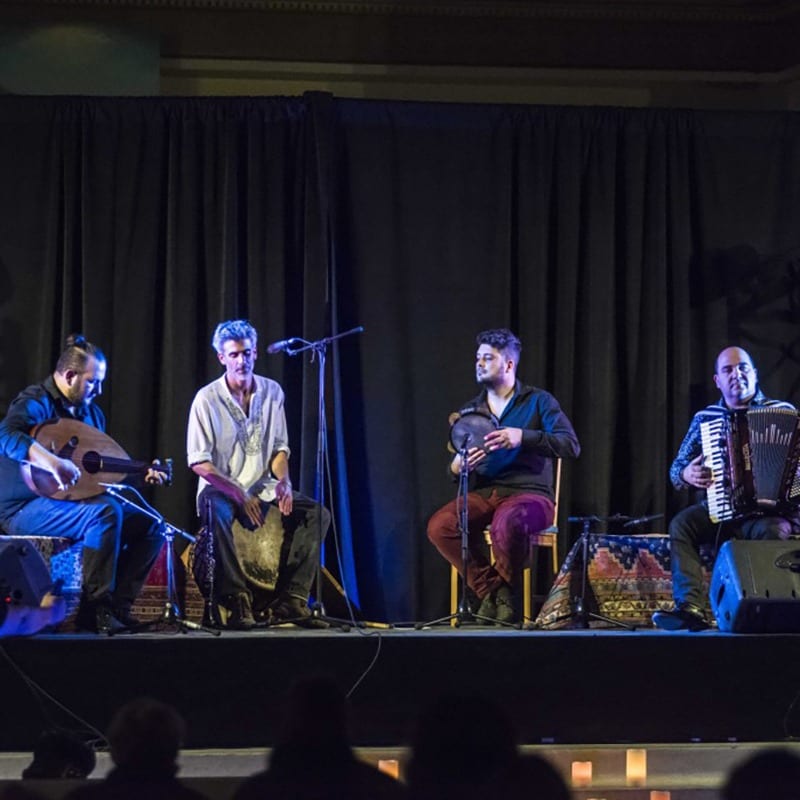 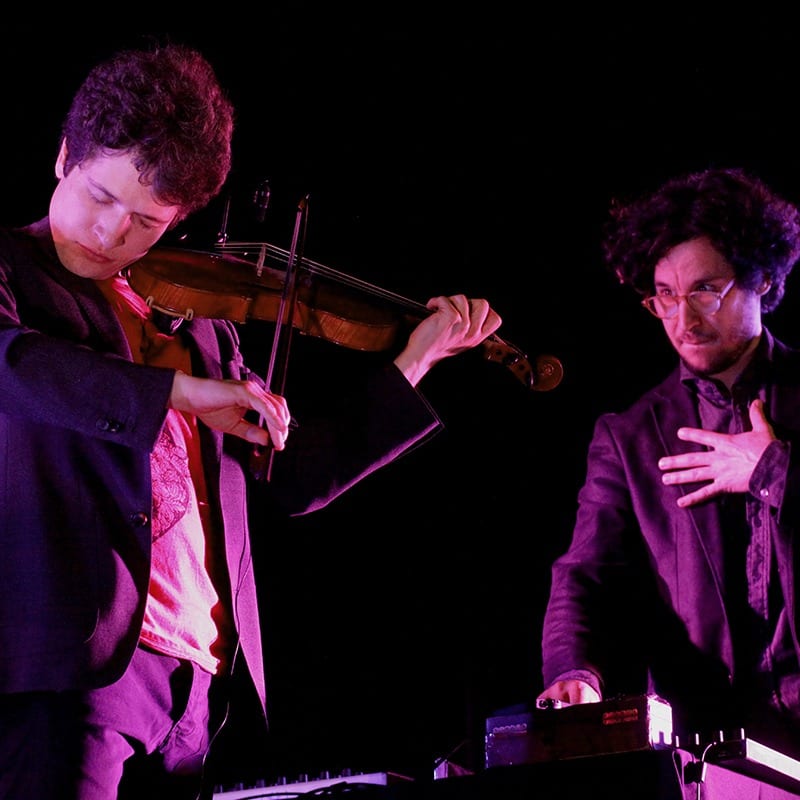 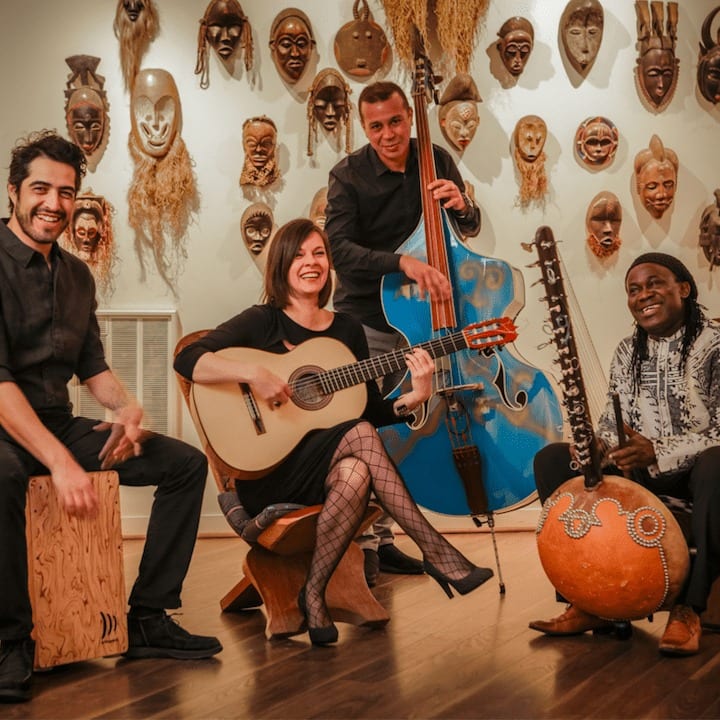 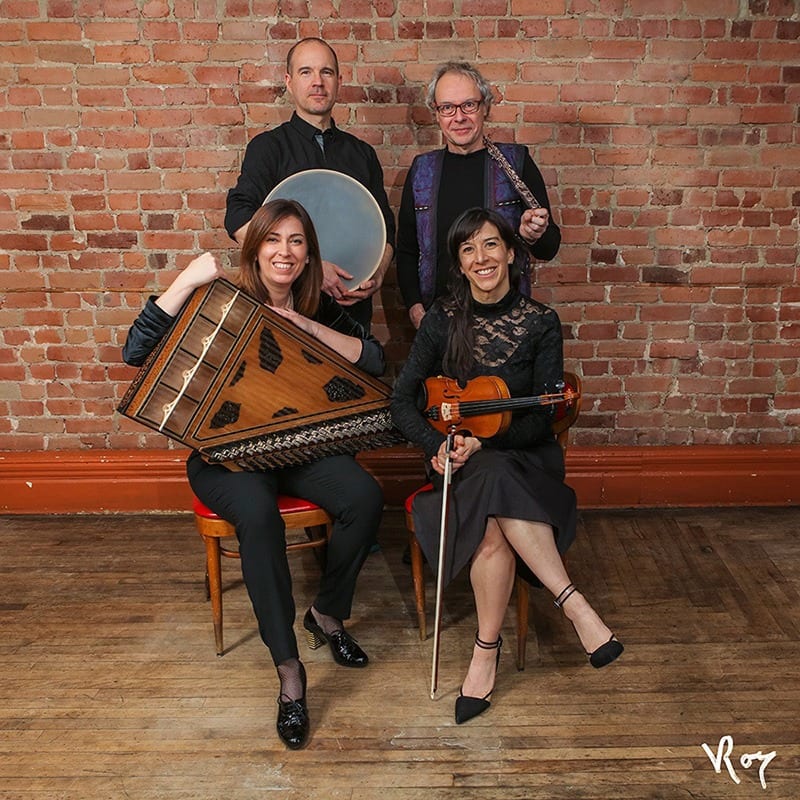 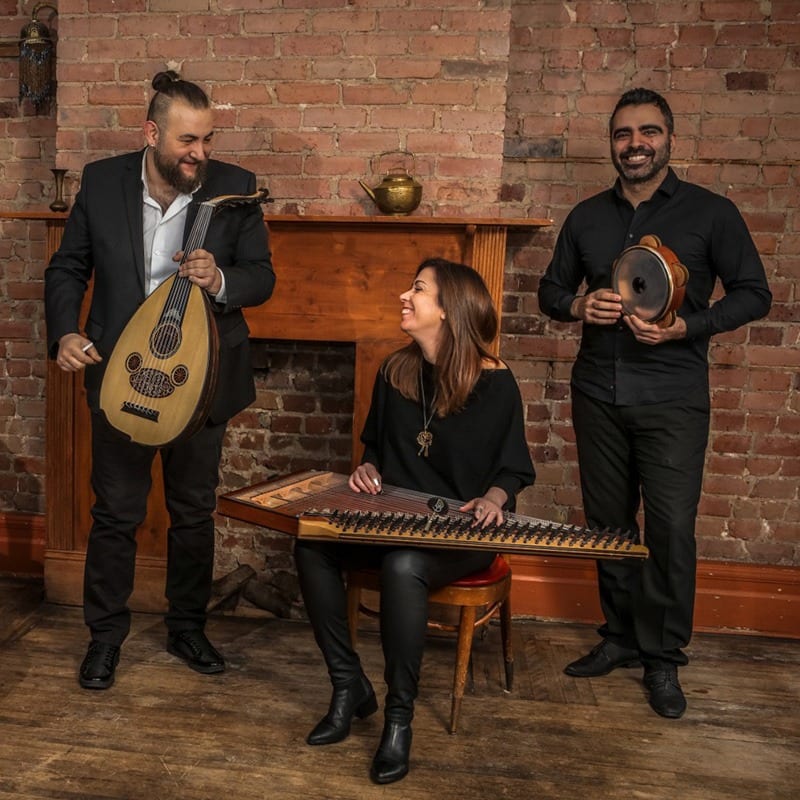 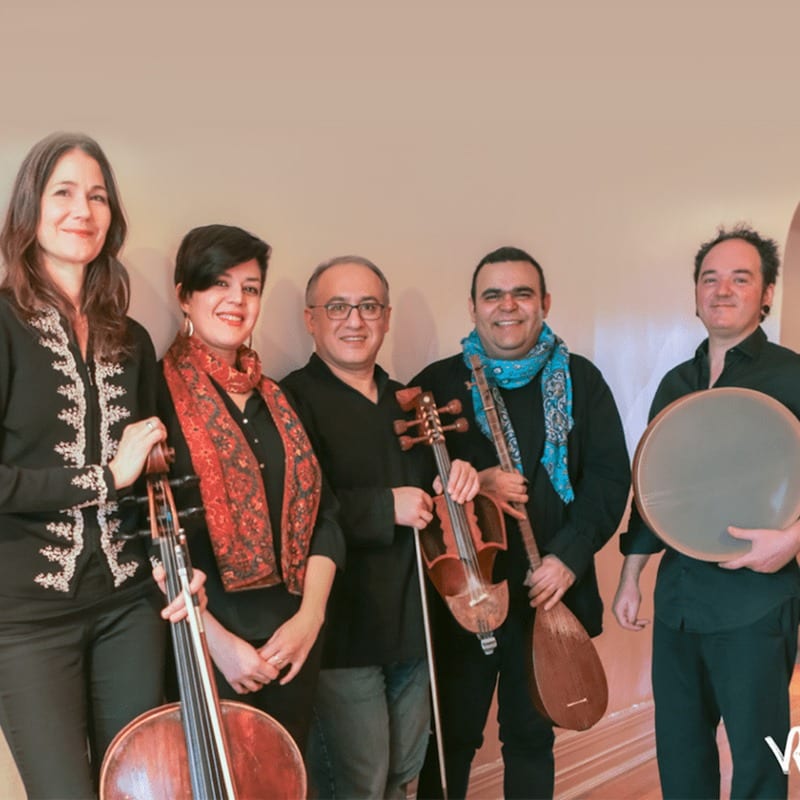 Tenjo No Ao is a manifestation of sounds alternately celestial and terrestrial, invoking gagaku and other traditional music of Japan, transformed through prisms of original composition, textural improvisation, acoustic spatialization and electronic manipulation.

For their premiere concert collaboration at the 2022 Festival of the Centre des Musiciens du Monde, Kaoru Watanabe, Sarah Pagé and Patrick Graham will use the entire space of Église Saint-Enfant-Jésus as their instrument, creating an immersive sound experience that will resound both the ground beneath the audience and the sky above them… 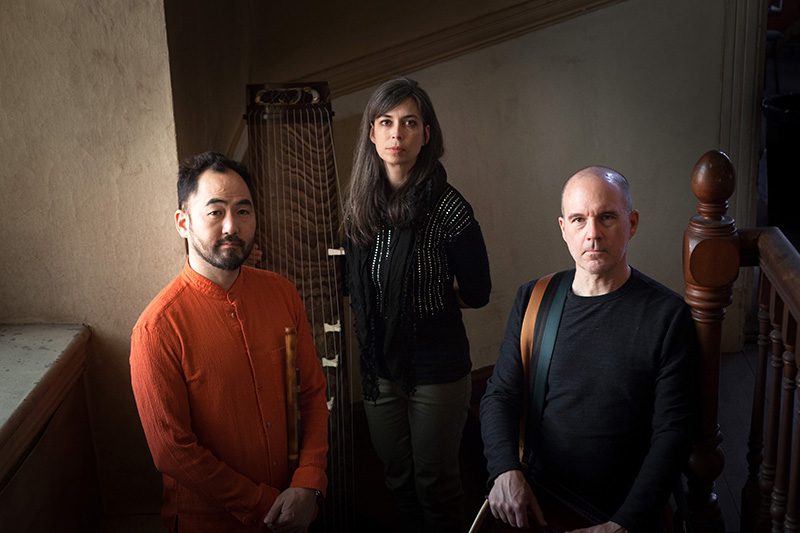 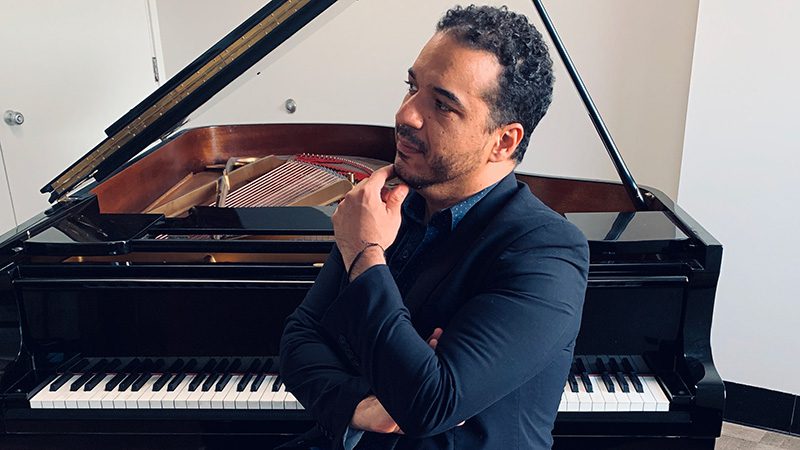 In this project Komty, Ricardo and Geremia would like to explore the landscapes hidden in their mother tongues: (Maka’a, from the eastern province of Cameroun), Spanish and Italian. The emerging soundscapes will be compared, superimposed, remixed in the effort of retrieving a sense of home through moving in two opposite directions: tracing back to the origins of one’s own language while at the same time generating a new space of encounter with other languages. How, for instance, a Latin jazz groove will metamorphose when superimposed to Pygmy polyphony––the sounds of the deep equatorial forest? How do equatorial polyrhythms encounter the melodic vocation of the Italian language? The languages will be used both for their poetic and musical power––original or taken from poems––, in the effort of driving strength from the very lands that generated them.

With the collaboration of the Conseil des arts de Montréal

Gheychak in trance, a music born from an environment imbued by the trance and the awakening of the senses induced by this ancient cordophone of Central Asia. Gheychak in trance is a poetic vision of music and the effects it produces upon those who approach it.

PreviousNext
12345
Behind the scenes

A meeting issued from a cultivated mix between Brazilian traditions and Hindustani music (India).

PreviousNext
12345
Behind the scenes

“Ensemble Oraciónes is a project I have been thinking about for about fifteen years. After exploring Greek folk songs, Rebetiko, Turkish and Arabic classical music, I was able to understand the influences that surround the repertoire of the Sephardim, which had cohabited for centuries during the Ottoman Empire with the Greeks, the Turks, the Armenians and Levantines. “Oraciónes”, is a type of song in the Sephardic repertoire, specific to prayer. After they were expelled from Spain, the Sephardic Jews were scattered and their diasporic culture was carried with them to Italy, Eastern Europe, Greece and Turkey . As a result, The Sephardim have integrated several musical influences (including the Maftirims of Edirne) in order to preserve their rituals. Therefore, Sephardic culture has left a rich legacy through its diaspora. Most of the songs are in Ladino, the ancient Judeo-Spanish, as well as some passages in Turkish and Greek.”

“Et si on se parlait…” is an artistic and human dialogue between three continents: Europe, Africa and South America. This residency explores communication channels between instruments from different cultures: a balafon, a bass, a pandeiro, a saxophone and a flute.

“Les Arrivants” is the encounter of 3 musicians recently settled in Montreal. This trio includes Amijai Shalev, (Argentina / Israel) on bandoneon, Abdul Wahab Kayyali (Jordan) on oud and Hamin Honari on daf and tombak (Iran / British Columbia). Through this project, they combine the traditions of Argentine tango, Arabic music and Persian rhythms. While paying tribute to their rich and original traditions, they also get inspired by their own personal and professional experiences to create a new space for dialogue. Together, they aim to cross the boundaries of their traditions and create an entirely new experience for themselves and for listeners. As Montreal becomes their home, their music also reflects their relationship and new attachment to the metropolis.

Confluence was born out of the desire to integrate musical traditions of diverse origins and to foster organic links between distinct hybrid identities.

The diverse musical origins of the members of the quartet together produce refined creations in which each member’s contribution highlights an inclusivity that is both unusual and familiar, freed from categorization.

The programme we are working on includes free interpretations of pieces by Erik Satie, Igor Stravinsky, an Indian raga played with a slow tango rhythm, free improvisations around little-known gems and new compositions for the ensemble.

The Masmoudi Quartet, created by Tunisian oud player Mohamed Masmoudi, is a Montreal based group composed of four talented musicians of diverse backgrounds. Mohamed Masmoudi is the artistic director of the project, with over 30 years of experience as a musician on the national and international scenes. His path has been forged by a rich variety of influences, such as classical, jazz and world music – especially of the Middle East. The inspiration for this project is built around his knowledge of Eastern music: a long-held tradition based on the mastering of maqamat (modes). Masmoudi’s own compositions are at the heart of this project, accompanied by those of his peers: Guillaume Martineau (piano), Simon Pagé (double bass) and Gabriel Paquin-Buki (clarinet). Together, the four musicians perfectly balance, creating beautifully written arrangements and surprising and stunning improvisations. In the repertoire that they arranged during a recent artistic residency at the Centre des Musicians du Monde (Montreal, Canada), the Eastern sounds of the oud are adorned with those of classical, jazz and Eastern Europe brilliantly brought forth via the piano, double bass and clarinet.

Showan Tavakol and Federico Tarazona, two musicians with deep roots in the rich traditions of Iran and Peru, met in Montreal and formed Duo Perse-Inca. This collaboration unites ancient musical systems, which the two artists explore from a contemporary perspective. In combining languages, techniques and aesthetics, they create a music that invokes a dialogue between two ancestral peoples, embodied by two of their iconic instruments, the Iranian kamancheh and the Andean charango.

The kamancheh contributes the distinctive sounds of traditional Persian music and its characteristic Radif repertoire, along with the rhythms and aesthetic elements of Iranian regional music such as Azeri and Kurdish music. The charango, a small Andean chordophone descended from the baroque guitar brought to South America by the colonizers in the 16th century, infuses the experience with harmonies and arpeggios founded in a rich musical mix of Quechua, Aymara and Spanish cultures.

From improvisation to co-composition, Duo Perse-Inca borrows from a variety of traditional genres and rhythms, combining modal textures from the Middle East and pentatonics from the Andes, but also Oriental melodies and Western harmonies.

Zazakèly is the depiction of my musical career: Born on Reunion Island, where I grew up amid the sounds of maloya drums and songs, I then travelled through West Africa, Eastern Europe and Colombia to learn and master the music of these regions of the world.

Mainly rooted in the maloya musical tradition, this concert tells the story of my native island, a tiny piece of land on the Silk Road in the middle of the Indian Ocean. An island that resonates with music from all over the world, an island where humans live in peace…

Together, Alexis Chartrand and Lévy Bourbonnais explore unexpected avenues of traditional Quebec music, from song melodies played on the violin and the harmonica to tunes from the repertoire of fiddle music. Alexis plays in a traditional style on his baroque violin, summoning both robust and lyrical timbres from his instrument, while Lévy’s chromatic harmonica puts a new spin on old fiddle tunes. Intersecting Quebecois dance music with contemporary free improvisation techniques and the baroque violin with digitized instruments, the musicians reinterpret melodies from Quebec’s traditional repertoire, revealing unsuspected depth in each piece. Their exploration is enriched through anachronism, in which the encounter and clash between divergent, and even contradictory, traditions highlight the beauty of a folk repertoire that is rarely the subject of such unhurried and poetic introspection…

This concert is the fruit of a musical project that Zal Sissokho nurtured over a long period of time. The idea was  born during a trip to Seville, when he first became interested in the sounds of flamenco. He was fascinated by the playing techniques of the musicians he met in Andalusia, and became set on creating music that would combine flamenco with the Mandinka culture of his native West Africa. When he was offered an artistic residency by the Centre des musiciens du monde in 2018, he approached Caroline Planté, a musician with more than 25 years’ experience as a composer, soloist and performer, but also one of the few women around today who plays the flamenco guitar professionally. Other collaborators on this project include Miguel Medina on percussion, Mohamed Masmoudi on oud and on double bass, Jean Félix Mailloux on double bass as well as Marcos Marin (voice) for a special participation on CD. Zal was infinitely grateful for their contributions to this intimate, acoustic ensemble. With this creation, he sought to expand the limits of my instrument, the kora, as far as possible.

After composing and playing with different artists and ensembles for the past 15 years, Didem Basar wanted to  create her own project, which would intertwine two musical influences: Turkish and Western classical music. The dialogue she created between the kanun and Western classical instruments is enriched by Turkish makams (modes), rhythmic cycles and improvisation, in compositions that have a distinctly impressionist approach.

An accomplished oud player and eternal musical traveller, Nazih Borish explores new artistic pathways with great musicians from Montreal. This concert is an encounter between virtuosos from different musical traditions, where Arabic and Turkish strings engage in a dialogue with percussion from the world.

Composer and multi-instrumentalist Pooria Pournazeri offers a musical journey into the heart of the poetry of the great 12th-century Persian scholar Omar Khayyam. This concert draws its musical influences from Iran to Kurdistan and features the vocal stylings of either Raha Yousefi or Habib Hoseini resonating with Pooria’s tanbur, Reza Abaee’s gheychak, Sheila Hannigan’s cello and Éric Breton’s percussion.

Behind the scenes
Scroll to top
Posting....
X